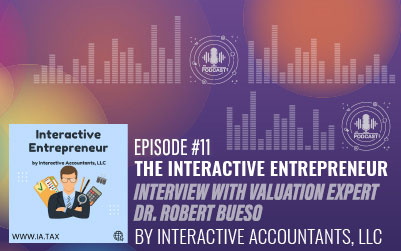 Matthew Shiebler: This is Matt Shiebler, your host, and welcome to the show this week, Dr. Robert Bueso. Dr. Bueso has been the owner now of The Valuation Group for longer than I have probably been. Around working. He has been performing valuation services for over 37 years. If you could believe that he was one of the previously with one of the largest CPA firms in the United States, he's also worked for one of the oldest consulting firms in the us.

And currently he helps my firm interact accountants out with tangible valuations, intangible valuations, cost segregation reports, you name it on that side of the accounting tax world. The Valuation Group is probably doing it. So welcome to the show, Dr. Bueso. Thank you so much for being with us.

Robert Bueso: It's my pleasure. I'm, I'm honored to be.

Matthew Shiebler: Well, Dr. Bueso we're gonna get right into it. And as you know, during our podcast, we ask entrepreneurs the four questions we think our listeners want to hear. And that first question is what is your biggest success in your career and what did it teach you?

Robert Bueso: The biggest success in my career has been working with macroeconomic, uh, uh, conditions where you we've been very, very, very successful in reigning in things such as inflation in the United States, back in the 1980s and, uh, restructuring, uh, um, the ensuring now, um, governmental entities so that they could function smoothly.

Like for instance, after, uh, the collapse of the Soviet union, um, they had no mechanism to, to, to transfer real estate, um, was akin to the problem we had in 1776 when king George owned everything. And then after that, they had to figure out how to do it here in the United States. Well, 300 and some years later, the Russians fell into the same track.

it was. That it was owned by the, by the USSR. Now it was a free for all and so those kind of things, uh, sort of been, bring a big smile to my face. Cause I feel like I've helped a lot of people in the process.

Matthew Shiebler: Wonderful. So you've been involved in a lot of government stuff before. That's amazing. So having. Talked about a failure of a government. This probably is a great segue into our next question. What's your worst failure in your career and what did that teach you?

Robert Bueso: Well, when I came out of, uh, originally from, from my schooling, uh, I thought that, uh, the world worked the way they taught me in the, in the, in the classroom.

And, uh, I found that men and women are illogical. They don't respond to the, uh, basic logical Macroeconomic precepts in that a lot of the policies that are made by governments, um, are wrong because they rely on us acting logically. Take for instance, Samuel's, uh, uh, Paulson's uh, giving the banks all that money in 2000.

Assuming that they do the right thing and lend it out, but they kept it for themselves cause they were risk averse. I've had a couple of those situations come up where I've, I've learned now that the human condition is much more important than the mathematical models and the hubris with which we approach solutions based on strictly class sit mathematical and statistical analysis was wrong.

Robert Bueso: One of the most important things is that financial sectors are constantly bringing up innovations. Uh, I remember back in the sixties with the CD as a certificate of deposit, not that little music thing or the CD realm that came later.

Robert Bueso: And the, the, every time something new comes out, I E cryptocurrency, um, everyone gets SOA excited over it. They, they, the thing's the next big thing. That's gonna make them tons and tons and tons of money. And, um, uh, they get into irrational exuberance over, over, over. Demanding the product or service. And then, uh, eventually they get broke, they go broke and, and they go broke because basically they were buying air.

Crypto is, is falling apart right now. A as the, uh, fed starts to, uh, tighten the, the, their grip on the money supply and everyone, everyone is running for the Hills. But that was gonna happen sooner or later, either the governments would've gonna come in and, uh, they were going to, uh, uh, control it or they were going to, uh, uh, it was gonna burn out on its own.

My biggest step to everybody is always be aware of how the government can come in and change your business plan overnight. And number two, don't chase air. There's basic fundamentals in business that you should follow day in and day out. I don't care what they invent. I don't care what the new idea. They all followed the same, uh, thing, whether it was the, uh, real estate market in 2008, whether it was the tech was gonna save our world in 2000, whether it was gonna be whatever debacle in the 1980s and the 1990s, or even beyond that, starting with the tulip, uh, uh, mobile back in the 16 hundreds in, in the Netherlands.

Um, it's been a violation of the fundamental principles of, of finance and economics that gets you in trouble. Don't take out too many loans, make sure you.

Matthew Shiebler: And there chase air, kinda like, you know, um, it reminds me a little bit about the, like the cabbage patch frames bake back in the eighties and you know, the beanie babies, I guess it was in the late nineties. Exactly. These, these cats, you know, I've kind of, I've always. Me personally, I've always seen the cryptocurrency like that. Now, did I ever buy a cryptocurrency? Yes, I did. I bought it because I had to learn about how to deal with the tax consequences of it, you know, so I bought some, I learned a little bit, I didn't really lose any money on it and I know people have made tons of money on it.

You know what I mean? And, and that happens. All the time, whether it's a tech stock or whatever people get in early, it goes up crazy. And, and then people try to get out and, you know, lose money, whatever. But, um, yeah, I'm, I'm not about chasing there. I I'm about, you know, Strategically chasing the right opportunity.

Correct. And I, and I, I like how you phrased that is to be strategic about it. And you know, the one thing that, that I took out of what you, what you heard and, and we don't always, you know, being in tax, I. I understand how the government can change your business model overnight. You know what I mean? But I don't think, I don't think the entrepreneur out there, like the small, like, let's say the small law firm or the small, uh, maybe that's a bad example.

Cause laws change all the time, but you know, let's say like, uh, A logistics company. I don't think they think about how government's just gonna change their model overnight because all of a sudden there's sanctions on Russia. You know what I mean?

Matthew Shiebler: interesting.It's an interesting concept. So the last question that we always like to ask are our entrepreneurs, while we were just chitchatting there about, you know, challenges and chasing air, right. Is, um, Right now, what do you think is your biggest challenge in your business at the valuation? Uh,

Robert Bueso: there's um, several challenges that are, that, that are, uh, perplexing.

One is that the constant innovation of products and the attempt to value intangibles, uh, intangible becoming more and more important in the balance sheets. They're becoming more important for the forecast of future, uh, income, which is the value of the business. The value of the business is the discounted future flow of, of money coming into the firm.

Right. So how are, how is the speed of technology? How are the new inventions, uh, coming about? How, how do you forecast things that don't even exist? Uh, that are gonna come in and change. Uh, your MOS withi, uh, let's say you are the, um, blacksmith, uh, and they come up with a car, uh, that's sort of a harsh and, and, and stark example, but it's simply more and more new products and services are coming online.

That. First of all don't last, very long because a new one is right behind there. It's uh, uh, but they changed drastically your ability to make, uh, make money. So how do you forecast that rate of, uh, uncertainty and that rate of, uh, volatility in the marketplace is one of the biggest challenges we face

Matthew Shiebler: one thing's for certain Dr. Bueso so I, I don't know how people are coming up with these crazy valuations on NFT. I don't get it. yeah, not

Robert Bueso: me either. Um, I was, I always ask

Robert Bueso: Right, right. And you, I remember somebody told me this many, many years ago, it's proven to be, uh, somewhat prophetic. The paper will hold anything. You can write anything down in black and, and white, but that doesn't make it true. And as much as you pray, it will never come to be, uh, you go back to fundamentals. Um, Even within the chain of, of inventions. Uh, and I go back quite a long way to when, uh, in the 19 64 65 worlds FARA I saw at, and T's exhibit of a little watch that you can speak into.

And I thought, oh, that'll never happen. Of course, that was about like a team then. Right. That'll never happen. Uh, and, uh, it's happened. Um, so how we have a watch yeah. Right, exactly. Exactly. Um, so we have to take those into account and realize that they are, they have a certain probability density function of occurring and, and how, and then calculating that and translating it into future, uh, income and then discounting.

That's the, here's the big question. At what rate do you discount future income? That's always been a, uh, one of the biggest problems that you have in valuations.

Matthew Shiebler: Mm. Well for, for those of our listeners that don't understand, how do you discount future cash flow? Maybe we'll save that one for another podcast because that one gets a little geeky.

Matthew Shiebler: of value. It is, it is, you know, the, the discounted value of future cash flows is one of the basics. They teach you in valuation class. So, well, listen, Dr. Bueso, I'm gonna leave it at that. Um, but I do want to ask you if our listeners do wanna get in touch with you for any questions on valuation that they may have, what's the best way for them to reach out.

Matthew Shiebler: Could you spell out your email address for everybody? Cuz I don't know if everybody now to spell way.

Matthew Shiebler: Wonderful. Thank you, Dr. Bueso. I appreciate that. And just an FYI for all of our listeners, Dr. Bueso actually speaks five languages. So if you do need to speak with him in Spanish or what other ones, Dr. Bueso, do you speak?

Robert Bueso: German Italian, Spanish, English, and Portuguese. So that's the sixth one.

Matthew Shiebler: So if you need to speak with him in any of those languages, feel free to reach out to him again, Dr. Bueso, thank you again for your time here on The Valuation Group. We appreciate

Robert Bueso: it. Thank you so much. I appreciate your time.