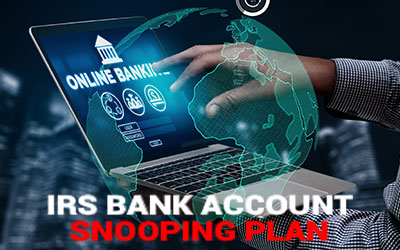 Perhaps you’ve heard rumors about the White House wanting to give the IRS access to your bank account. Here’s what Interactive Accountants research has revealed.

Per our research, the Biden administration plan would require banks to tell the IRS the total annual amount of money deposited into and withdrawn from your bank account if those funds total at least $10,000 (was $600 only a few weeks ago). IRS Commissioner Charles Rettig testified before the Senate Finance Committee in June and in his testimony, financial institutions would report data on financial accounts in an information return if this proposed plan by the White House is enacted. The proposed annual return would report gross inflows and outflows with a breakdown for physical cash, transactions with a foreign account, and transfers to and from another account with the same owner. It would exclude wage deposits and payments under federal programs (supposedly). This requirement would apply to all business and personal accounts from financial institutions, including bank, loan, and investment accounts, with the exception of accounts below a low de minimis gross flow threshold of $10,000 or fair market value of $10,000.

Crack Down on Tax Evasion

The plan is intended to help the IRS crack down on tax evasion, resulting in billions of dollars in revenue for the U.S. Treasury that would otherwise remain uncollected. The plan also has some serious proponents, as Treasury Secretary Janet Yellen recently sent a letter to the chairman of the House Ways and Means Committee to voice her enthusiastic support of the proposal

What are your thoughts on this? Is this an invasion of Privacy or is this really what is needed to help bring tax cheats to justice? Will the IRS abuse this power? What if you deposit loan proceeds, how will those be reflected? Will this be too burdensome on our banking system? Why aren’t we already doing something like this? Let’s explore some of the positive and negative connections with this rumor!

First let’s look at the positives, as I always like to stay positive. With the IRS knowing all amounts of money deposited into our bank accounts, perhaps we could eliminate 1099 reporting, since they will already know how much income one received. Maybe this will also make it easier for companies to report how much revenue they earned on their sales tax returns or corporate tax returns, since the IRS will already know how much it should be. Maybe this will really help the IRS catch more tax cheats. Maybe it can even help fight the wars or terror and drugs by knowing how much cash certain folks are depositing.

Now let’s talk about the negatives…So the IRS want’s to know every detail on every account above $10,000? We know that $10,000 is the Federal threshold for reporting cash transactions, but just because you deposited $10,000 doesn’t mean it was income. Maybe Grandma gave her grandson $10,000 for his high school graduation. Maybe Dad gave his daughter $10,000 to buy a new car or as a housewarming gift, or maybe it was just a generous birthday gift. Will the IRS be able to tell if this is income or not? What about all the employees at the IRS, will they be snooping on their neighbor’s bank account deposits to see if they came into money? What if the IRS get’s hacked, now not only will the hackers have access to their tax information but potentially also their banking information? What if the IRS has a disgruntled employee and they blab all over social media how much money was deposited into a Senators bank account during their election campaign? What if the IRS now wants to act like a payday loan organization because they know how much money you deposit into your bank? There seems to be a bit more negatives here than positives.

As noted above, all cash transactions above $10,000 are required to be reported to the IRS on form 8300 within 15 days. So if this practice is already in place, why do the IRS need a direct line into the banks? Why not just crack down on enforcement of the already existent form? Or is this form broken and trying to enforce it just a nightmare and that’s why the IRS wants a direct line to the banks.

The Treasury said the information will only be used to target high-income taxpayers and that audit rates among those earning less than $400,000 a year won’t increase. Wealthy individuals, according to the fact sheet, have much more “discretion of whether they pay their taxes” because they are more likely to earn “less visible streams” of income that aren’t automatically reported to the IRS, as is the case for wages and Social Security recipients. The Treasury estimates that tax compliance rates are far higher among low- and middle-income households compared with top-earning ones and that tax evasion by the top 1% of taxpayers exceeds $160 billion annually. The Treasury has also said it would help them find high-income taxpayers who earn money from small businesses, rental properties and other ways that aren’t directly reported to the IRS. The IRS estimates that taxpayers pay 99% of their taxes owed when there is third-party reporting, like there is for wages and salaries. That figure drops to 45% when there isn’t such verification. The Treasury estimates that uncollected taxes could total as much as $7 trillion over the next decade.

Senator Mike Crapo, the top Republican on the Senate Finance Committee, noted there are better ways to address the tax gap -- the shortfall between those taxes owed and those actually paid to the IRS -- and improve compliance. He said that Congress could change the tax code to address deductions that are being abused, and that lawmakers should give the IRS more funding to improve computer systems and taxpayer services so that the agency can better help individuals properly pay what they owe.


The questions are endless, but here at Interactive Accountants, we want our clients to be informed of what is happening in the tax world!

Care to discuss this topic of something else, book an appoitment with our owner Matthew Shiebler, CPA. He’s been practicing accounting for over 25 years now and is a business owner, just like you!