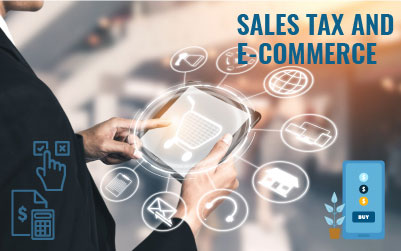 In this article, we will go over some commonly asked questions and some hot topics that were touched upon in some of our previous engagements in and out of the office.

Difficulties around sales tax and ecommerce.

Even though sales tax has been a big part of our economy since its implementation, there have been some issues to say the least, when it comes to sales tax around ecommerce transactions. While ecommerce was created to be a format of transaction that is faster than the normal cash-based interactions we are all used to, it's coming with a bit of a learning curve that's making it take more time than it did in the first place.

The major climatic event of this conflict made its way up to the Supreme Court with the state of South Dakota against Wayfair in 2018. The case was ruled 5 to 4 in the majority, saying that states may charge tax on a purchase made, even to an out-of-state seller. This ruling created a bit of a nightmare scenario for buyers as they can now be charged sales tax for buying off a business that may not even have a physical presence in their state. The first major concern with a landscape such as this is that it will create less competition in the ecommerce market. This is because certain sellers will have the ability to set up warehouses in as many states as they need, while the competition may not be able to keep up. While at the core of American business, it may also lead to some businesses facing difficulty if they cannot reach the level they need it to be.

The second issue with this is that sales tax is slightly different for each state, so the question then becomes which state gets the sales tax? Some would argue that it would be the original state of the buyer's location; some would argue the opposite saying it should be based on the location of the business. Some people feel sales tax should be based Less on a physical location to determine its rate but more on a universal rate. Either the government will implement across-the-board or a whole new separate form of sales tax specifically and solely associated with ecommerce transactions.

As you can see, this is only the tip of the iceberg, and it's already a pretty messy situation, at least from a numbers perspective. Here at Interactive Accountants, we have made it our mission to understand the rules and how they change with each state because our business is a multi-state business, meaning that we're not just doing research for our clients. Still, we are also doing research for ourselves, hoping that our clients and we can continue to see profits as the business landscape changes. To learn more about some other research regarding cryptocurrency, please click here to look at some of our previous articles.

What is an economic nexus?

Economic Nexus is a term created not long ago. It essentially means a situation where a seller must collect sales tax based on a state’s revenue or item threshold related to goods a seller delivers into such a state. Economic Nexus has been influenced by two things: first the number of items delivered into a certain state and second, sales volume delivered into a certain State. Each state maintains their own threshold. This means that ecommerce sellers who are doing well enough to go over the revenue threshold of a state will have to register to collect sales taxes in such states. They will also be held to a higher standard regarding record keeping for such sales that they charge and/or collect taxes on. This will be especially true for ecommerce based businesses that have physical locations in more than one state.

Given that economic nexus is determined by these factors on a state by state level, there isn't much information to share in a general sense beyond the fact that each state in the US does have a different revenue threshold. Usually, state thresholds are close together in value, however it can change based on the overall wealth and prosperity of a state and certain area. Individually we would love to consult with you on your threshold and what tips and tricks will serve you best!

The types of people involved, website, marketplace, and both.

There are three major categories when it comes to the type of players you're going to see in the ecommerce field. The first are those that are purely website-driven. These types of sellers use some type of third-party software to be able to sell exclusively online. Some ecommerce businesses may not even contain physical warehouses or a physical address. They do not necessarily produce but are just another place to order from. When thinking about exclusively online retailers, we don't want to confuse you by thinking that they can avoid having any type of physical presence; rather, the goal is to inform you about the changing rules in the industry. The days of local shops are increasingly going away. Website-driven businesses will need to use some type of tool to track their sales based on the jurisdiction to determine if they are indeed in an economic nexus or not. Website-driven ecommerce people need to do this because they need to ensure their nexus thresholds are being addressed. These businesses will also need to register for sales tax and can do so, if appropriate, through the streamlined sales tax registration system, or a state’s taxation division.

The next type of ecommerce business you'll see is those that operate purely on existing Marketplace websites. These will be the people that sell or transfer their products through major online retail websites like Amazon or eBay. The good thing about this type of seller is that they often do not need to pay as much attention to these new rules and regulations because the marketplaces often make them follow those rules by default. To continue with our example, an eCommerce seller that operates through Amazon will not need to pay as much attention to each little sales tax that is collected because the platform of Amazon already does a lot of that. One variable that Marketplace sellers may need to worry about is getting a resale certificate to participate in a marketplace. This is done through registering to collect sales tax, which will require the business to file sales tax returns, but those are generally more simple to file.

The third and final type of ecommerce seller is not as climactic as you expect because it is simply a fusion of the previous two. As they are known, Blended Sellers will sell both on their websites and through online marketplaces like Amazon. We have found that these types of players tend to be the most opportunistic but do not necessarily make more or less money than others. The path that will serve you best will be based on your current financial situation, and this is something we would love to go over with you individually to best help serve you and your needs.

The next piece of advice we can give is to get financial consulting; our team has made it our mission to stay at the forefront of the knowledge and changes involved in this concept. Due to the still-growing nature of this market, there are still chances that we will likely see, and we can help guide you and your ecommerce business through them.

Here at Interactive Accountants, helping businesses grow and succeed financially is our number one goal. We are here to help! If you are a professional in any field where sales tax or ecommerce applies, you will need a CPA firm that understands your business needs. So give us a call or schedule a free 30 minutes consultation with our owner Matthew Shiebler, CPA. He's been practicing accounting for over 25 years now and is a business owner, just like you! If you're still not convinced yet to give us a call, feel free to look at our other blogs regarding the help we offer other businesses and practices.