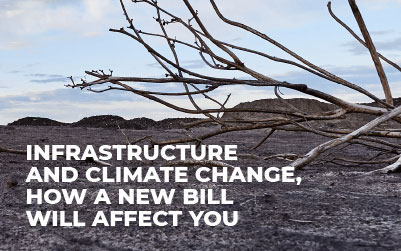 Infrastructure and Climate Change, How a New Bill Will Affect You

Due to a recent bill passed by the President, Republican and Democratic parties, some changes to American Infrastructure are on the way. Here are some of the highlights.

This past week President Biden signed a new infrastructure bill worth over one-trillion dollars into law. The bill was passed through bipartisan efforts from both sides of the political spectrum. This is expected to be a major victory in terms of bipartisanship and for the people, given that all the money in the bill will be poured into improving the nation's roads, ports, and powerlines. The bill will not address every infrastructural need that the nation is currently facing. The President's original plan was to sign a bill for over 2.3 trillion dollars.

These plans also include possible dividends to be provided to business owners, electric vehicle owners, and manufacturers. Also, receiving a large sum of money, the economy will see some changes over the course of a few years. President Biden has said that, unlike previous stimulus checks that have been given out to help the economy immediately, this plan is supposed to be a more stable and slow growth as improvements are made, and benefits are seen.

In terms of taxes, the details have yet to be completely hashed out. Still, everyone should watch their expenses related to electric vehicles and machines over those powered by gas.

The first expected changes that we can expect will be in our roads. Over tens of billions of the full bill will improve and rebuild many roads that require updating. Aside from expected delays during the construction, the expected economic growth should be worth it. Additionally, improvements to public transportation will be underway as more electric busses and trains are put into use under the bill. Most of these plans will be implemented over 2022 after the new year. This delay is due to the simultaneous tax cuts and raises that Biden plans to put into order to support the bill and its goals.

How Will This Affect you?

All Americans are concerned with how these changes will affect them. In terms of infrastructure, many rural and outdated city areas will see the most obvious improvements in their roads and other transportation services. City areas will also see an implementation of over 500,000 electric charging stations spread out over the nation's power grid. The primary focus is to fight climate change and give financial incentives to people by giving tax credits. These tax credits will be aimed at businesses and local governments improving their transportation departments and services. Additionally, areas with major ports and water infrastructure will see some changes in the new year. Other than that, tax credits are expected to be given to electric vehicle owners and manufacturers.

For those in more northern states like New Jersey and New York, expected tax changes will revolve around improving roads and replacing many public vehicles favoring electric or hybrid vehicles where possible. These states, along with others, will see an expected sum of over 100 billion dollars put into their transportation infrastructure. Southern states like Florida will see improvements in their water infrastructure, with over 60 billion dollars going into improvements for their ports and docks.

Government Organizations such as the Joint Committee on Taxation (JCT) and the Congressional Budget Office (CBO) will lay out more definitive plans for the bill in the coming months. Across the board, expected tax changes are not supposed to be drastic for anyone making under 400,000 dollars in a given year before income taxes. While there is still a great deal of planning and details that need to be sorted out, it is safe to say that both parties in the US Government are not trying to raise your taxes. Many fiscally conservative democrats want to see Biden's plan in action and put it through the JCT and the CBO before working out the bill's final details. If the scoring on the CBO looks good, then there is a chance for some people to possibly see some tax relief going into next year if they meet the qualifications.

The major takeaway that businesses and owners should keep is that currently, electricity is the future of the nature of the economy. Businesses should start keeping track of expenses related to transportation and consider their options in going electric. There are no tax credits set in stone yet, but given the President's incentive to go green, businesses, in particular, have many opportunities in the future to both grow and get some compensation. Those in the transportation industry specifically are advised to become a certified vendor with the Federal Government, applying through the SAM.gov system, which can be found within the US Federal Contractor Registration (USFCR).

An industry that will also see growth in job opportunities and financing will be legal practices. With all the questions and semantics still left up in the air now, legal practices will see many opportunities to get involved with the law behind the tax changes and possible credits that both businesses and individuals will see.

For individual people, there is only one key area to focus on at the moment, and that is your personal expenses related to transportation and, if you have one, electric and or hybrid vehicles. It would be a good first step to speak with your financial advisor about whether or not your area taxes the possession of electric vehicles. Many of our clients live in areas that are friendly towards those with electric and hybrid vehicles. Still, the legal status of vehicles can change even on levels as small as local government. For those of you who have some electric vehicle, make sure to speak with financial counseling about possible benefits you may see in the coming year as Biden's plan plays out.

Regardless of financial status, everyone is encouraged to keep track of this bill and the implications it will have on your taxes, business, or personal. Since the bill passed just last week, the government still has a lot. Unfortunately, that means that there are not many hard numbers at this moment regarding tax credit. While the spending has been laid out, it is good to keep in mind that it is still changing. The next step is to talk with your accountant and go over what this bill specifically will do for you!

Should you ever wish to chat about these topics, or something else, please do not hesitate to book a free consultation with Matthew Shiebler, CPA